Sales Tech at the Intersection of Efficiency and Effectiveness

If you’ve been in sales long, you’ve felt stuck between two opposing forces. 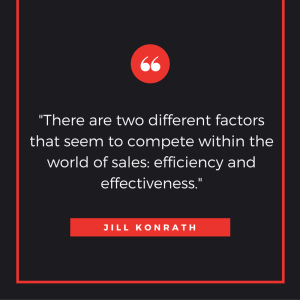 In Jill Konrath’s session at this year’s Sales Acceleration Summit, she made this observation about these two forces:

“[T]here are two different factors that seem to compete within the world of sales. On one side, there is efficiency. Efficiency deals with how many calls reps are making and their conversion rates. It’s the numbers side of the equation. On the other hand, we have effectiveness. Effectiveness allows you to do things like sell more with fewer prospects.”

To most salespeople, as implied by Konrath, these forces feel constantly at odds.

On one hand, you’ve felt compelled to play the numbers game. You need to make as many calls, send as many emails, and knock on as many doors as you can, knowing that only a small percentage will turn into sales. When Thomas Edison talked about failing one out of every ten attempts and, in response, increasing his number of attempts, he was basically bowing down to this force. Apparently, both salespeople and inventors alike are beholden to the force of efficiency.

But then there’s the other force, the force that keeps you wondering. Could you have performed better in that last sales pitch? Is your sales deck’s 25th slide killing your conversion rates? Is that ebook you’ve been sending out to your prospects really the best for their needs? Often it can feel like, to turn your attention to this kind of analysis, experimentation, and optimization, you have to sacrifice some of that efficiency.

But is this really true? While the tussle Konrath explained has been the reality for salespeople for the last 100 years, it might not be as permanent and unavoidable as it used to be. Advances in the sales tech stack might be making these once-opposing forces into forces working in tandem.

Consider, for instance, how using sales tech tools can automate much of the work formerly demanded by efficiency. At the same time, these same automation tools are also giving Sales unprecedented data into what pitches and content are working best. And they can show how, when, and with whom that content is being shared. This is invaluable fuel to pursue the elusive goal of effectiveness.

In other words, with new sales tech, salespeople can satisfy the demands of both efficiency and effectiveness without sacrificing one for the other.

To learn how Consensus gives Sales the data to continually close sales and improve operations, click on the orange “Watch Demo” button below. Presales » Sales Tech at the Intersection of Efficiency and Effectiveness