The 4 Funniest Mistakes We’ve Encountered (and Made) This Week 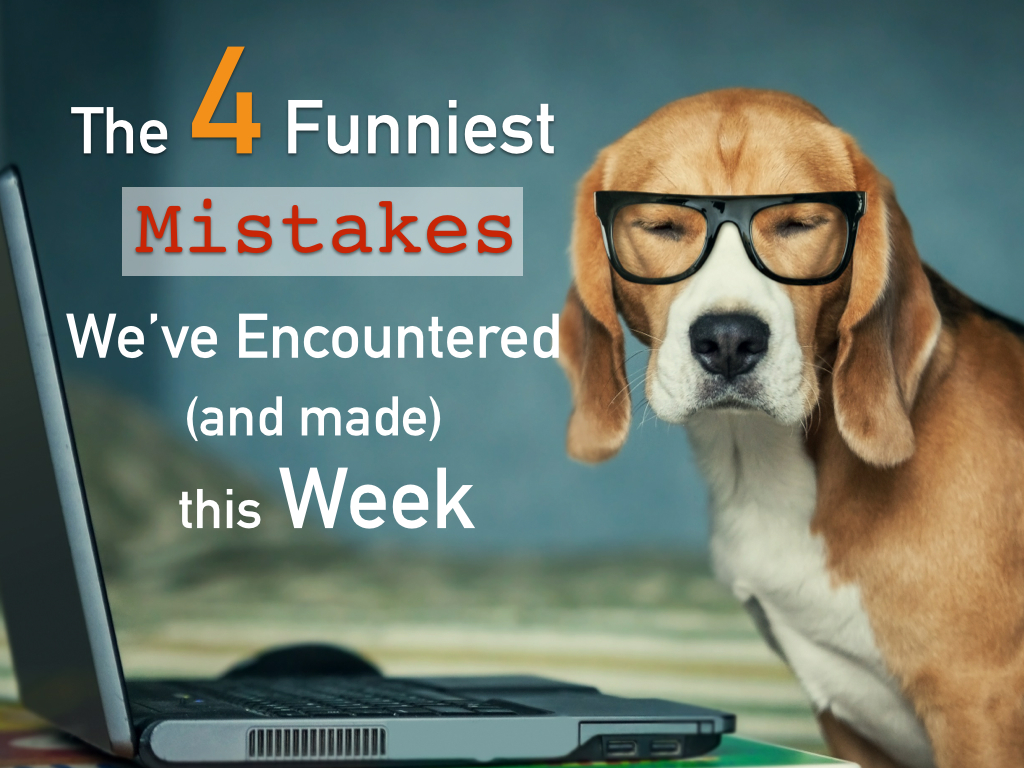 “If at first you don’t succeed, try, try again.”

I promise I’m not giving you an English lesson. In fact, I have made many of these mistakes myself, and without acknowledging our mistakes, we can’t learn from them. Laughing them off always helps me too. I understand that not everything has to be grammatically perfect in scriptwriting, because we speak differently than we write.

However, we want to get off on the right foot and make a stellar first impression with your demo videos. So, the scriptwriting department put together a list of funny errors we found while editing scripts. The examples below have been rephrased and changed for privacy reasons. Without further ado, here are a few of the funniest mistakes we have caught (and made) recently.

1.  “Other companies are high-stress and unable to deliver at times. But like a pair of comfy sweatpants, XYZ Corp pulls it off. ”

This, my friends, is a misplaced modifier. We come across them quite frequently when editing. Misplaced modifiers are defined as, “words, phrases, or clauses that do not clearly relate to the word or phrase they are intended to modify.”

I’ve found that people make this mistake because they haven’t double- and triple-checked their punctuation and sentence structure. Once made aware of the mistake, their face typically turns bright red and they quickly change the sentence—especially when it comes to their company—ahem—pulling pants off.

I’ll be the first to admit that I’m guilty of this. I’ve had to be reigned in several times for using clichés. I think those that do not write on a daily basis think that clichés are always welcome in a script. However, they usually come off as a little corny. I suppose however, all’s well that ends well.

3. “He was tall, strapping, confident, attentive, charismatic, and very easy on the eyes.”

We get the picture—let’s keep it professional here! As my high school English teacher—Ms. Barr—would have put it, this character must be “a fine figure of a man”. But there’s nothing good-looking about overusing adjectives. In fact, it can sometimes be the ugly cousin of using clichés. This mistake occurs mostly when we write use cases (stories) to better explain a product. Most clients want us to write scripts that are upbeat and professional, but when we get the edits back, clients have added two or three adjectives to each sentence of the use case. We understand you love your product, but there’s a point when it starts to sound long winded.

4. “In Europe they have duvets in their bathrooms—Oh no! I mean they have bidets.”

I saved my favorite for last. When I was little, my mom (who received her bachelors in English) called me “Mistress Malaprop,” so I realize that I make this mistake myself. For those who don’t know what a malapropism is, it is defined by Merriam-Webster as “an amusing error that occurs when a person mistakenly uses a word that sounds like another word but that has a very different meaning.” This seems to occur more when people are speaking. However, it can also be written out. I think that autocorrect can be the culprit at times, but this is by far one of the funniest errors I see in copywriting.

As author and diplomat Johann Wolfgang von Goethe once said, “By seeking and blundering we learn.” We have all made a few blunders while writing. Even those who write for a living slip-up from time to time. However, we laugh at ourselves, learn, and move on with life. The important thing is that you are learning something every day.