Working for an ad agency early in my career gave me the opportunity to dive into a variety of client industries. One client was the Gina Bachauer International Piano Competition, which takes place once every four years in Salt Lake City. Competitors from China to Cuba perform forty-five minute long concertos to demonstrate their mastery of the instrument and the music. At the competition I attended, multiple contestants played the same Rachmaninoff piece, one right after the other. It all sounded the same to my untrained ear, which made for a very long afternoon. But the “oohs” and “ahs” from the octogenarians sitting behind me made me wonder what I was missing. These attuned listeners explained that it was the spaces between the notes—and how each artist uniquely interpreted them—that personalized each rendition and made it unique.

The same could be said of industry conferences like Dreamforce. It’s the conversations that happen in the spaces between the keynotes, panels and training sessions on the formal agenda that connect people to one another, personalizing the experience and keeping them coming back year after year.

Colorful conversations with characters like Kraig Kleeman, “The World’s Greatest Cold Caller”. Kraig shared the backstory behind his friendship with Bono (Is that why Kraig wears sunglasses all the time?) with Kurt Shaver, social selling expert, and me. Kraig was on vacation with his brother in the Netherlands. They were having drinks in the lobby of a posh hotel. Bono and his people were doing the same across the way. Kraig’s brother bet him the full cost of their not-inexpensive European vacation that Kraig couldn’t get a meeting with Bono. So Kraig raised a glass to Bono, toasting him for “defending the world’s poor”, a phrase Kraig knew from reading Bono’s commencement speeches. Bono responded by raising a glass to Kraig. Minutes later, Bono’s security guard invited Kraig to join Bono’s table, while holding other hotel guests at bay. Since then, Kraig has enjoyed a personal relationship with Bono, joining him backstage at concerts—an ongoing reminder to his brother to never bet against Kraig.

I also shared a breathless conversation about building early-stage startups on an early-morning run with serial entrepreneur Steve Richard of VorsightBP, the sales training company. Steve demo’d his new app, Executive Voice, while we ran down the streets of San Francisco and up an impossibly steep hill to the base of Coit Tower, where we got a surprise wake-up call from an unexpected wily coyote in the heart of The City. Steve’s ExecVision.io app lets you listen to recorded sales calls and reply with your feedback—on the go—to reps who want to get better. Come to find out, Steve also worked for CEB early on and gained some great insights into how to package and market thought leadership from that experience.

At ConnectAndSell’s after-party at Hemingway’s Hideaway (thanks again for the VIP access, Chad Burmeister), Alice Heiman shared the history behind MHI Global and her father’s vision for creating the world’s biggest sales training organization. Alice’s enthusiasm for helping growth companies scale and realize their exit strategies is contagious.

And I ran into former colleagues from Jump Associates: Owen Schoppe was working in the design area in the West Hall, helping people learn about the new UI he and the Salesforce product design team have created, and Jon Gabrio is shaping Samsung’s strategy for the future of television. 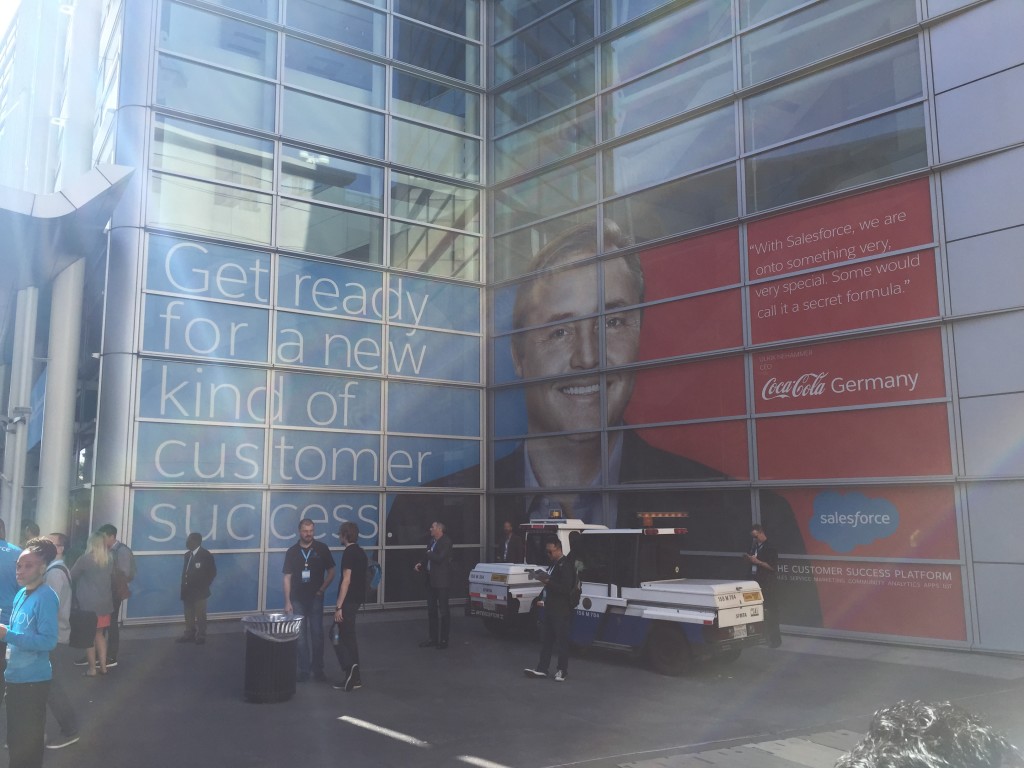 Chad Butler shared Infer’s amazing 60-second demo app on his smartphone with me, along with the world’s first seasonal clock called The Present, a clever metaphor for Infer’s value proposition: Infer helps companies distill mountains of information down into a simple score that provides a standard definition of what a good customer looks like and who is likely to buy. Infer’ gave these clocks away to remind people of what they can accomplish in a season or a year.

Then there were impromptu idea jam sessions with like-minded entrepreneurs, Mike Vandenbos, entrepreneur in residence at Zipwhip (text messaging for landlines) in Seattle, Dave Shanley, Founder and CEO of Notion (simplified business intelligence) in Portland, and Britton Manasco from Visible Impact (positioning and messaging consultancy) in Austin. Among other things, we talked about the idea of driving buying consensus through personalized automated demos. I appreciated Dave’s recommendation to check out the az16 podcast and Britton’s thoughts on the sales enablement vendor ecosystem. Nicolas De Kouchkovsky of CaCube Consulting stopped by our booth and shared his insightful Inside Technology Landscape with us post show.

And let’s not forget the thousands of conversations that Tami McQueen’s breakthrough campaign sparked for SalesLoft. Building on SalesLoft’s Marc Benioff look-alike campaign from last year, Tami had the idea to nominate Marc for president of the United States this time, generating tons of attention for SalesLoft at the show and dozens of shout outs in the social sphere from adoring fans and Adrian Grenier. She executed the campaign brilliantly, complete with presidential buttons that everyone wore on their show lanyards. (You can still join the “Marc Benioff for President” petition here: https://salesloft.com/benioff2020.)

Trish Bertuzzi and Jill Konrath made our very own Hilary Bird feel right at home at the Women in Technology meetup. Trish and Jill make everyone feel like a VIP when you talk with them one on one because they’re so present; yet another reason why they’re so successful.

Finally, seeing the entire buying group from RingCentral walking our way had to be one of the most satisfying moments of the show for me. A conversation with two of their decision makers at the ConnectAndSell and TopOpps Sales Velocity Dreamforce event re-ignited a conversation that had begun before the show and gave us the unique opportunity to talk with all five stakeholders at once—in person. Where else can you get that kind of opportunity, except at a show like Dreamforce?

As much as we celebrate sales and marketing automation, there’s still nothing better than meeting with buyers and partners in person.