How do you add a MailChimp contact into the HighRise CRM? Or, how do you get an invoice from Chargify into QuickBooks Online? These are just two examples of the challenge of integrating web-based applications.

Because SaaS (Software as a Service) is web-based, one of its primary benefits is the ability to integrate with other SaaS products, theoretically making your life easier. This is commonly done through an API (Application Programming Interface) that ‘exposes’ the software for integration development. What this means in plain English is that an API is a virtual door and hallway that gives you limited entrance and access into the other software application. This lets two different software programs communicate with each other regardless of which programming language they were originally written in.

APIs are extremely useful but require knowledgeable software engineers to work with them. Consequently many software providers build little integration packages to make it easier to link one SaaS tool with another, requiring very little or no programming at all. For example, suppose you use an email marketing service (e.g. MailChimp, ConstantContact, VerticalResponse, etc.) to collect website leads and put them into lists that you can use to send email newsletters to later. And suppose that each time someone signs up on your website you also want the information to go directly into your CRM so your sales people can follow up with them. To accomplish something like this, you generally have two options: first, use the APIs and do some custom programming; second, if an integration is already built by one of the two software providers, you can usually set that up with very little effort. 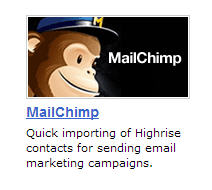 That was the case with us. We are trying to collect leads for Consensus beta testers and we use MailChimp for the sign-up form and contact database and we use Highrise for our CRM. At first I was happy to notice that MailChimp provides a built-in integration with Highrise.

The problem I ran into quickly, however, as you can see by the description, is that the integration is built to pull Highrise contacts into MailChimp, not the other way around. What I wanted to do was make my new MailChimp contact also be input directly into Highrise. That’s a ‘no can do’ with the built-in integration. So I was left thinking that I would have to build a custom integration or some other solution (hours, if not days, of work to get it going correctly), until, that is, I came across Zapier.

Zapier Saves the Day [melodramatic clapping and cheering in background]

Zapier aims to make it extremely easy to build the integration you want without having to rely on the software providers or software engineers. They do this by acting as the middle man between the APIs–or you might imagine a kind of visual API that speaks all of the SaaS application languages. Zapier has you set up triggers (indicating something that happens, which you get to define, in one of the SaaS applications) that then kick off an action in the other SaaS applications.

For example, the trigger could be that you receive a new subscriber in MailChimp. When that happens you want it to create a contact in Highrise.

What’s left is to tell Zapier your account info for both systems (of course you only want to do this if you trust Zapier) then map where data from one system goes into the other system. For example, should the phone number in MailChimp go to the Work Phone or Cell Phone field in Highrise. Then…whammo, it does the rest.

How to integrate your different applications is one of the thorniest problems to solve in moving to SaaS. I was able to do this specific integration in about ten minutes. Now whenever anyone signs up to be a beta tester, they also go directly into our CRM so that I can check up on them. Wow…that’s several hours I can spend instead mountain biking with my son, or playing tennis with my daughter, or writing a blog entry on, say, Zapier (ahem). In my opinion, truly brilliant.

At Consensus we plan to work with Zapier to make it just as easy to build integrations such as this between Consensus and many other SaaS applications. Once completed you would be able to, for example, create a contact in say Salesforce, Highrise or MailChimp whenever someone signs up through the Consensus form. Or suppose you want to send your Consensus data into HubSpot so it can be scored for marketing automation. These are just a few examples of the power of integrations that you’ll see from Consensus.

Don’t forget to check out Zapier’s community Zap Template Gallery, where users can post integrations they’ve put together so you can re-use and build what you need even faster. Have you used Zapier? What integrations (zaps) did you build with it? Are you aware of other similar tools?