How Demo Automation is the New Printing Press 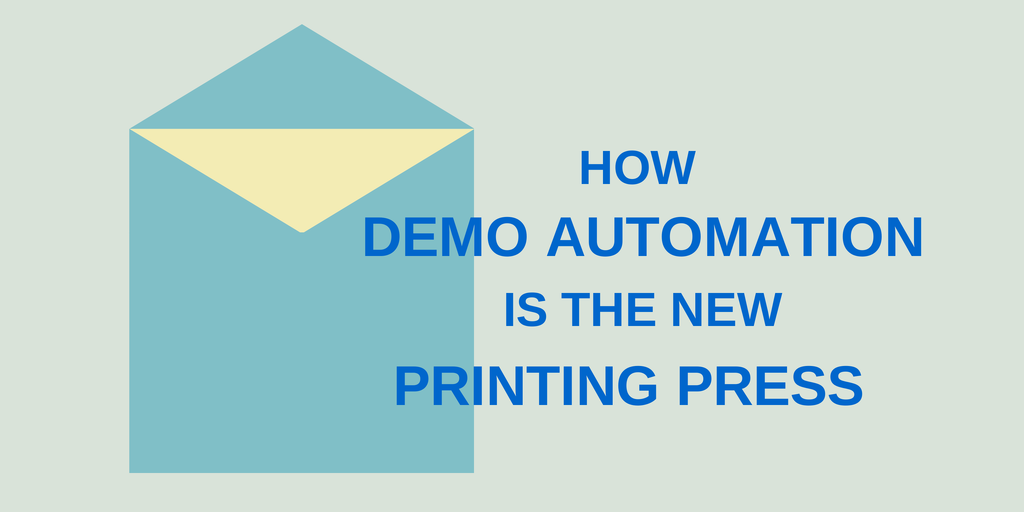 The printing press revolutionized the world by making knowledge easily and quickly accessible to anyone. Before its arrival, all written material had to be hand copied. So how does that relate to smart demo automation? Because demo automation is also making knowledge available to the world at an exponentially faster rate than before, and at an insanely lower cost. But before we jump into this, let’s get some background info on the printing press and smart demo automation so we can make an accurate comparison.

Prior to the 15th century, in order to get any type of written material you could only purchase hand copied text. This came at a great expense to the owner and was considered extremely rare. Copying any written text was such a lengthy process that in many cultures it was considered a great religious sacrifice. But in 1450, a revolutionary machine was invented, called the Gutenberg press. Able to produce 3,600 pages per workday, the Gutenberg printing press and the following printing advancements have made the written word available to practically every person in the world today.

Smart demo automation is the “printing press” of today’s sales world. It allows us to turn out an infinite supply of personalized demos at the click of a button, all at next to zero cost. Here’s how it works:

Let’s say you have a potential client that’s:

Smart demo automation gives you the ability to find out their needs and show them more about your company by letting them experience a personalized demo on your website or sending it to them directly.

The demo video is interactive so it allows them to select which features and benefits are most relevant to their needs. The analytics notify you once they start watching the demo, giving you invaluable insight about what they’re looking for in a product. Calling the prospect once they’re done watching it (since it’s fresh in their mind) becomes powerful because you can jump into a conversation about their specific interests.

In the three scenarios above, you would have been able to deliver three personalized demos with three clicks. Not only are you saving time by not demoing about common or high-level concepts, but you’re getting a great understanding of what their needs are and presto! You’re now able to intuitively navigate your conversations toward closing the deal that would have cradled you to the grave.

Without smart demo automation, selling to a potential client could mean going through: lead generation, cold calling, and praying to the mighty green goddess of sales that you’ll be able to find the decision maker and hook them with a brief 30 second pitch. After gaining their interest, you face the mountainous battle of scheduling and rescheduling meetings and live demos with their decision makers. You’re trying to get them up to speed, but you know that some prospects will still drop out with reasons like “it’s not a fit”, or his uglier cousin, “no real good reason”. After filtering through your pipeline, when the waters have calmed a bit, you will have a handful of committed prospects. All that work is simplified when you can deliver an automated demo to each prospect, so that before you meet with them, they become educated, qualified, and ready to jump in to the specifics that usually come later.

Being able to mass provide smart demo videos that are shareable with anyone at the click of a button is revolutionizing sales. You’re no longer the crazed salesman giving a 30 second desperation pitch to a stranger to get inside their house; but the neighbor that’s freely sharing a cup of sugar, with no expectation of repayment. It’s a different feeling. Less commitment, a personalized experience, and deeper insights for you as a sales person. It just makes sense.

If you think smart demo automation is right for your company, check out these posts:

Embracing Asynchronicty in Your Sales Process

Presales » How Demo Automation is the New Printing Press