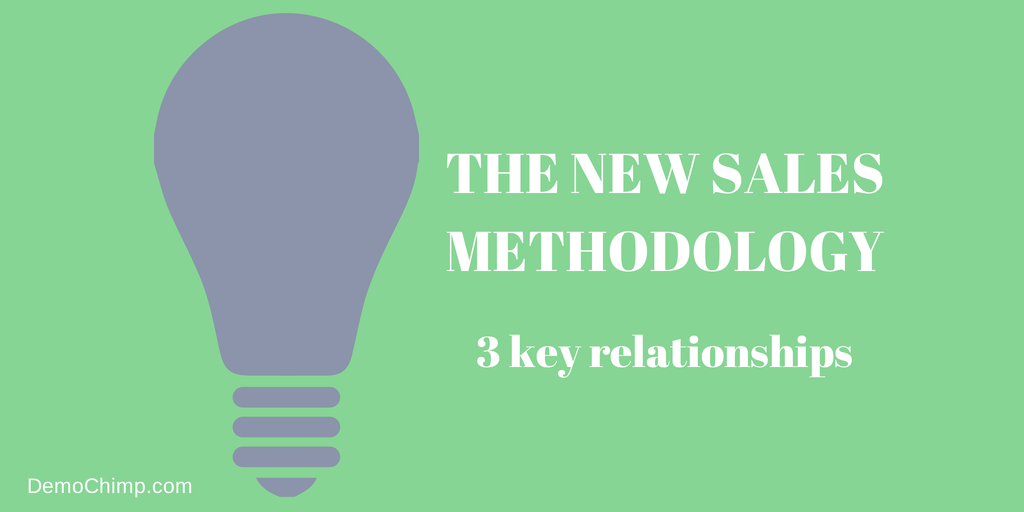 Today’s sales world is a lot different than it was 100 years ago. The thing is, salespeople haven’t really updated their sales methodologies to deal with these changes. One of the biggest challenges they’re facing is building trust and healthy relationships with their prospects – also known as trust based selling. But how can that still be a challenge? They’ve known since 1916 (almost a century!) that trust based selling is the most effective way of selling. It’s because they’re trying to use outdated methods to build that trust and it isn’t working. They need a new sales methodology; one that focuses on not just relationships with prospects, but also on relationships with marketing and sales automation.

This post digs into 3 of the biggest factors that have caused sales to change over the years, and the 3 most important relationships you need to focus on in order to update your sales methodology.

The 3 Big Factors that Have Caused Sales to Change:

These relationships are the solution to the problems that new factors pose for sales.

Your relationship with sales automation software – learn to trust it

Sales automation is designed to make you be better at your job. It’s taking care of the repetitive, small tasks that suck up so much time every day – time that could be spent talking to new prospects, creating new sales ideas or closing deals. Sales automation is also collecting valuable analytics about your prospects, so you can be more educated on their needs. Yet, there’s a common resistance to use it.

A Consensus sales rep talked to a prospect who told him, “we’re just doing what we’re doing because it’s what we’re comfortable with. It’s what works and we don’t want to move onto something new because…it’s different.” The common resistance stems from fear that sales automation is going to replace salespeople. Why spend more money on software that takes care of tasks that are already being done by employees?

You may already advocate for sales automation, which means you’re ahead of the curve. But if the cost of it is holding you back, think of it this way: the cost of automation software is significantly less than a salary, and you want that salary money spent in the most effective way – which will not be by having employees spend time on repetitive tasks. According to a CMO Council report, salespeople spend 40% of their time creating presentations and demos and customizing messages. That means you’re losing 5.2 months of productivity every year. So your ROI on automation software will be 5.2 months worth of productivity that automation will cover, on top of the 40% increase in time that your salespeople will now have to close more deals.

Taking advantage of sales automation shows that you’re open to change – and if you want to keep a competitive edge, you’ll always have to be changing. Sales thought leader Dave Kahle writes, “those salespeople who take the initiative to become automation-enabled will find themselves growing in importance to their customers and in value to their companies.”

Your relationship with marketing – let the sales/marketing line blur

Another old sales methodology was that sales and marketing were very different and shouldn’t be considered the same thing. This led to the constant butting heads of the teams – “marketing brings me bad leads” or “salespeople never follow up with the leads we get them”. How can you have a good relationship externally, with your customers, if you can’t even have them internally? Start by taking some time to learn how your marketing team finds their leads or creates content. They have invaluable information about leads that you may not – this information makes the transition from sales to marketing a lot smoother and less noticeable.

Your relationship with sales automation can play a big role in blurring the sales/marketing line too. Dave Motheral, director of software vendor alliances at Aprimo says, “sales and marketing are moving closer together with new direct marketing capabilities…and it’s coming not necessarily from the long-awaited meeting of minds but rather through advances in technology.”

For example, at Consensus our sales team follows up with leads that marketing brings to them. Part of sales’ follow-up is sending our automated demo videos to leads. These demo videos record valuable analytics about each lead (how long they watched the video, what features they found important, whether or not they shared the video). This process comes full circle when marketing studies the data collected by sales to see what trends appear in the analytics. This way, marketing can have a better sense of what audience to target, which will help them send more quality leads to sales.

You probably think it’s common sense to treat prospects the way you’d want to be treated. Yet there are plenty of old sales methodologies still being used that don’t exactly have the prospect’s best interest in mind. For example, “never ask a question to which you don’t know the answer” or “the salesperson should seek to control the customer and the sales process”. These types of selling techniques don’t set the framework for a relationship based on trust. And when they do result in a sale, the relationship can be strained because the salesperson doesn’t really know what the prospect needs because they were focused on the short-term goal of just making a sale.

Use your new analytics from automation software to get a better sense of your prospects. Talk to your marketing team about their lead gen observations. Doing your research will allow you to ask prospects personalized questions, which will humanize your conversations and…build trust!

University of Pennsylvania Professor Martin Seligman said, “we scientists have found that doing a kindness produces the single most reliable momentary increase in well-being of any exercise we have tested.” Try not to limit your efforts at building a healthy relationship with just these three. You’ll find the more you work at building a strong rapport, the more naturally it comes. You’ll look forward to working with your marketing team, talking to your prospects and being more productive by leveraging sales automation software.

Already got your new methodolgy down but need to do some fine tuning? Check out our posts on sales tips:

How to Avoid Bad Sales Demos by Using Old-School Wisdom