How to Sell Your Boss on Demo Automation 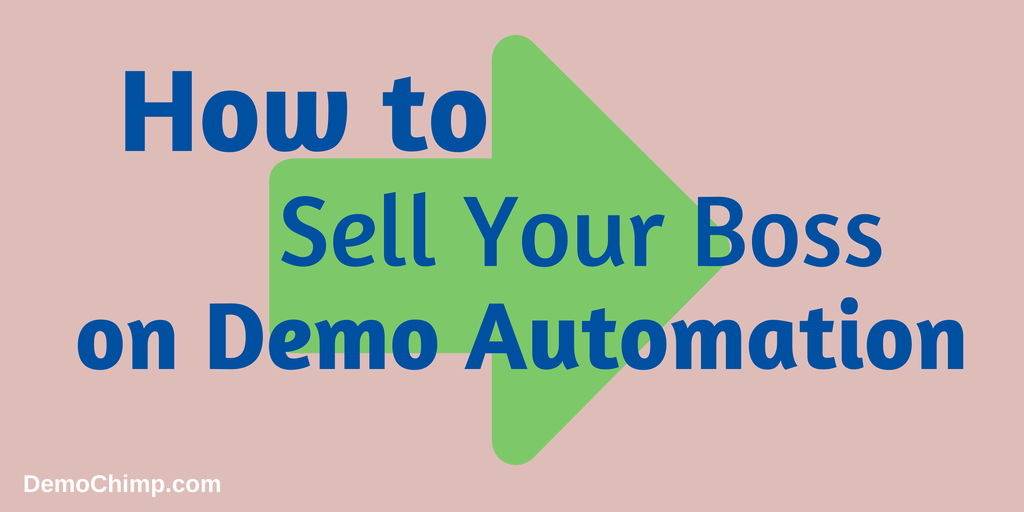 You’re a salesperson with the drive to increase both your productivity and your sales team’s productivity. You really want to see your company do better than it’s ever done before. You know the tools that are needed to improve efficiency; the hard part is selling it to your boss.

Sales executives are incredibly busy. It’d be great to toss around ideas with them on how to step up your game, but that’s not totally realistic. When meeting with them, you need a solid outline, with proof, of how your suggestion will improve productivity. This blog post digs into 3 of the biggest points you need to cover in order to sell your boss on demo automation.

John Bonini of HubSpot writes, “When you think of results, you’re thinking in terms of the resources, platforms, and actions needed in order to hit numbers. Your boss on the other hand, is thinking about one thing: numbers.” Sales executives need data to prove to their boss that they’re being successful at their jobs. They need to know what the ROI looks like, if it will increase profit margins, what the long-term costs will accrue to.

This is a tough, but extremely necessary, step. It puts your idea to the test by tying it to actual data and numbers. Coming into the meeting saying, “I know that demo automation will increase the efficiency of our sales team” is a lot less effective than saying:

“Demo automation can make our sales team 3X more effective. Our sales reps do about 4 demos a day. Each demo takes 45-60 minutes, and each customer requires on average 3 demos (because every member of the buying panel wants to see a demo). This means each salesperson can only handle a caseload of 28 prospects.

But if we use demo automation, then we’re already cutting out a third of those demos by emailing prospects the video instead of spending 45-60 minutes showing them. So that alone saves each of our salespeople 5 hours a week. And by the time they’re on the phone with the prospect, the prospect is already educated on our product so we’re spending 25 minutes on the phone with them instead of 45-60 minutes. This translates into productivity increasing by 3X – so we can reach 84 prospects instead of 28.”

The latter is a bit wordier, but packs a strong punch because it will be in terms that your sales exec understands and expects.

Sales execs are aware that their sales team’s time gets nickel-and-dimed away on reports, creating presentations and customizing messages. It’s not a surprise that there’s rarely enough time for proper sales training. This leads to salespeople not being confident in their methods, which makes it hard for them to feel good about what they’re doing. This results in an unmotivated sales team who has no way of improving because the basic foundation has not been set up for them.

The interesting thing about this pain point is that you’re part of it. By presenting demo automation to your boss, you’re already showing him/her that you aren’t satisfied with the way things are currently being done. This works to your advantage because your voice can represent the sales team as a whole – and your boss wants to make his/her sales team happy and productive.

So just remember that numbers and data hold their place with a sales exec, but a sales exec is nothing without a motivated and productive sales team. Demo automation can boost morale by freeing up a sales rep’s time so they can do more of what they like (closing deals, reaching out to new prospects) rather than spending time on doing repetitive demos.

POINT #2 – DO YOUR HOMEWORK: HOW WOULD IT BE IMPLEMENTED?

So your boss likes the idea of demo automation. You’ve got his/her attention with the numbers and data you’ve researched – now what?

Take the extra step to show that you’ve already planned out how to implement this new software. What’s unique about pitching demo automation to your boss is that you can’t really label it “CRM” software because it’s designed for sales, not so much marketing. As we’ve talked about before, it’s a marketing tool designed for sales. Its purpose is to bring in more sales leads, not to manage already-existing customers.

That being said, sales execs tend to view all automation with a certain skepticism. Sales thought leader Mac McIntosh says, “Sales execs understand the value of CRM, but getting the sales force to comply is difficult. Sales reps would rather be in the field making calls and closing sales, not sitting at computers ‘filling in the little boxes.’” This means you need really persuasive reasoning highlighting the short-term, tangible benefits of implementing this software. Have answers thought out for questions like:

What is the cost?

What is the timeline?

What will they need from us?

Who will manage the process?

POINT #3 – PERSONALIZE IT: USE STORIES AND EXAMPLES

Your biggest challenge in presenting demo automation to your boss is going up against his/her already-existing knowledge of what does work. As Bonini of HubSpot writes, “While your more traditional, conservative boss may be slow to adopt new strategies, he’s also operating with the “curse of knowledge,” meaning he’s only going off of what he knows to have worked in the past. He can’t unlearn these things.” This is where showing success stories of other companies using this software, or showing actual demo video examples, can be great for helping your boss visualize demo automation in his/her company. Says Mac McIntosh, “Sales execs are very competitive. You’ll definitely get their interest if you show what their competitors have achieved.”

By leveraging these three tips, you’re bound to have a much higher chance at winning over your boss with demo automation. Adopting anything new always requires risk; but it’s this risk that keeps us changing and constantly growing. Help your boss feel good about their job, your sales team’s jobs, and the company as a whole by leveraging demo automation.

Prospecting and Selling with Demo Automation

Presales » How to Sell Your Boss on Demo Automation